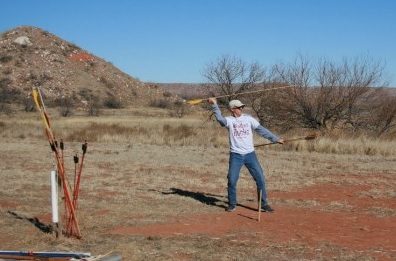 An atlatl is a spear throwing device/lever. It uses enhanced leverage to gain a higher level of velocity during javelin or dart-throwing.  There remains a bearing surface on it. It makes the user store energy during the throw.

An atlatl may possess a shaft with a spur or cup at the end. It not only supports but also propels the ending tip of the dart. The atlatlis is held firmly in one hand. This places the grip to the farthest tip from the cup.

Basically, the action of the wrist and the upper arm helps in the dart-throwing. The action arm along with the atlatl jointly acts as the lever. The atlatl is considered to be the precursor of the bow and arrow.

What is an Atlatl?

An atlatl is lightweight and fast-moving added extension of the acting arm thereby enhancing the length of the lever in the process.

This excess length enables the user to impart better and stronger force to the dart covering a longer distance. This way, it imparts more energy and better speed.

The atlatl gives a boost to the thrust and velocity of the weapon when compared to other spear throwing device. Moreover, its usage is safer because it allows the user to stand far away from the prey to a safe distance.

The History of Atlatl

This type of weapon carries a long history of usage of at least 17,000 years. It dates back to the early history of mankind of the Paleolithic era in Europe. As per the current researches and studies, the earliest information regarding atlatl has been sourced from various French caves.

It is believed that during the ice age, humans used atlatl for hunting Megafauna. It was a principal source of the food supply.

But the truth is that archaeologists are also not definite about exactly how old these weapons are.

With the passage of time, the form of hunting changed and so did the weapons. Therefore, atlatl gradually got transformed to bow and arrow.

The Structure of Atlatls

The atlatl was made from a slanted or curved piece of either wood or ivory or bone. Its length ranged between 5” and 24” and the width varied from 1”-3”. One end of this contained a hook.

This hook is a perfect fit for a nock-end of a different spear shaft, ranging from 3 ft.- 8 ft. in length. The working end of this shaft is kept sharp or suitable enough to implement a sharp projectile point for attack.

When compared with contemporary scenarios, the motion used by the thrower of the atlatl is equivalent to that of a baseball pitcher. Throughout the flight after the throw, the weapon maintains the level perfectly and the dart hits the target without a miss.

If a spear of 5 ft. equipped with an atlatl of at least 1.5 ft. is properly thrown, the velocity can reach up to 60 miles an hour. Therefore, it is evident that the proper targeted use of this weapon can be highly lethal.

Modern Use of Atlatl

The usage of Atlatl is all but dead in the contemporary era. The World Atlatl Association sponsors ISAC or the International Standard Accuracy Contest for Atlatl. Small competitions of atlatl are held all over the world. There are workshops for interested candidates.

This age-old sport is still active within the human race.

A thorough discussion and details regarding atlatl are available in the archives of American Antiquity journals. There have been studies regarding which weapon is better—an atlatl or a bow and arrow. But, there has been any definite answer to this debate.

Approximately at around 1000 B.C. started gaining popularity. But the atlatls were still in use alongside, especially in the Arctic and Mexico regions.

Although the bows and arrows are easier to use with better ammunition capacity, yet these dart systems possess certain advantages over them.

As these spears can be used one-handedly, the other hand remains free. It can be used to hold a shield during a war or use the paddle in a kayak. Moreover, dampness and wet conditions also do not spoil their efficiency.

During the contemporary times, spear-throwing is observed by certain groups of native people in Australia. South America, the Arctic and New Guinea.

As with the case of archery, there is no definite rule or technique for using an atlatl. It is better to keep experimenting to master this art for perfection.